The Amazon Guardians have come to Europe

The Onaway Trust is proud to be supporting the Amazon Guardians in their tireless fight to defend Brazil’s Indigenous peoples, their territory and the future of the planet we all rely on. 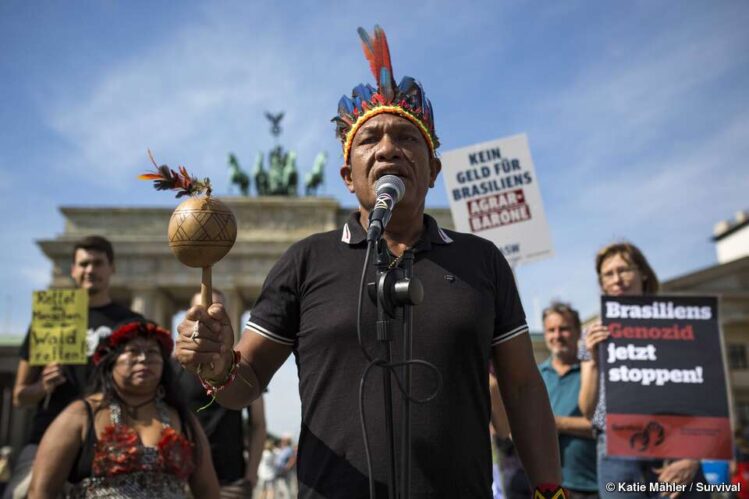 Olimpio Guajajara, an Amazon Guardian from the Indigenous Guajajara tribe of Araribóia territory in Brazil, has recently visited Europe for the first time on a mission to raise awareness of the suffering and threats facing his people at the hands of money-grabbing industries.

The Amazon Guardians are a brave and dedicated group of Guajajara tribal members willing to risk their lives in order to stand up for the rights and lands of Indigenous Amazonian peoples, including the uncontacted Awá tribe, who are under constant threat from invasion by illegal loggers and cattle ranchers hoping to exploit their native lands for profit.

After visiting London to deliver speeches and make several media appearances,  Guardian leader, Olimpio, travelled throughout the continent in an effort to raise support for the group’s work and cause. The Onaway Trust had the great honour of speaking with Olimpio during his UK visit and we are proud to be working once again with long-term partner organisation Survival International in order to support the Amazon Guardians in their crucial mission.

Fighting back against these powerful and government-backed forces is highly dangerous work, with 80 Guajajara members having been killed in the last two decades alone. On the 3rd of September, Olimpio and his tribe received the shocking news that a sixth member of the Amazon Guardians, Janildo Oliveira, had been murdered for defending this precious territory, an area which is supposed to be protected by law. None of the murderers have yet been brought to justice. This tragedy further highlights the need for international support and solidarity with the Guardians’ cause and will surely add further fuel to the fire as they continue their vital and inspiring work.

Onaway believes that all Indigenous peoples deserve the right to live their traditional lifestyles free of exploitation and oppression. If you’d like to join us in our support of the Amazon Guardians or wish to find out more about their fight against genocide and environmental destruction, please follow the links throughout.